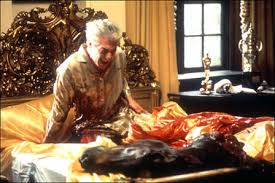 An offer he should not have refused!

Maybe it's because me and the boys watched The Godfather last evening that this morning I'm thinking movies. It might also be because yesterday afternoon my agent called to tell me she's presently packaging my newest bestselling thriller, The Remains, into a major motion picture prospect (details should be posted on Publishers Marketplace soon, or so I'm told).

I've been down the movie route more than a few times, only to have had my foot just about through the door when said door slammed me in the face. My novel As Catch Can, had three back-to-back reads from DreamWorks, and looked like a sure sale, but in the end, the firm decided to punt. My other novels enjoy similar Hollywood success. But Hollywood is a funny place and an even funnier business and I never look at reads and interest other than with a huge bag of salt.

Sometimes however, I feel a kinship with Vito Corleone's Godson, the crooner dude with the good looks and the "olive oil" voice. If only there were a Godfather I could seek council with, ask him to help me score a Tinseltown buyer for my new book. Maybe all it would take is a few phone calls and perhaps a face-to-face with a producer on behalf of his counciliary, and just like that, I'd be the newest Hollywood sensation. Or, if the producer refuses to buy, he might just wake up with a bloody horse head in his bed.

Ok, back to reality.

My guess is that sooner or later I will have one of my books produced into a film. Not to blow my own horn but The Remains would indeed make a great movie. It boasts all the essential plot elements: strong female lead, pile driving tension, strong evil antagonist, feel-good-lovable supporting role in the form of an autistic savant painter turned hero, a great story, and much more. Good title too.

Like all novelists I often get the question: who do you see playing he roles of your characters in the movie? Just last evening I got this question from a fan who was having a beer in a bar in Cape Cod (he was also kind enough to buy me a beer...Oh the perks of being a writer!).

Ok, so here goes: here's who I picture starring in the movie version of The Remains (forgive me if I spell any of these names wrong. I never read People Magazine!:

Ok, you sorta gotta kinda read the book to know what I'm talking about. But just giving you a visual sense of who might be look good in these roles might afford you some idea of what the book is all about.

Anyway, for all you producers out there who are considering taking a look into a good book by an Italian American author, I hope you think about perhaps optioning the novel. If not, then I'd better be going. Mr. Corleone prefers to receive bad news right away.
Posted by Vincent Zandri at 6:25 AM