More from the Hybrid Mindset

I write a lot of books and stories. I work at pulp speed, for the most part (3,000+ words per day). I edit my new work on a daily basis so that at the end of a new novel or novella, I'm not left with the daunting task of having to put Humpty Dumpty back together again, because he was never put together properly in the first place.

Prior to the digital revolution, you were going to be hard-pressed to find a publisher, big or small, who would be willing to publish more than one book per year. Maybe you could enjoy the benefits of multiple publishers, but even then, if you were somehow miraculously able to put out three projects of say, 60K words per year, you were among the very few who were doing so (romance authors got away with this). The more accurate truth is that you would be pissing off all three publishers. They'd accuse you of competing with your own titles (thus those pesky non-compete clauses in publishers contracts).

Competing with your own titles: Almost all publishers will discourage you from publishing books other than the ones they are publishing for you. They don't want you to be stealing sales from yourself. Or more accurately said, they don't want you stealing from their bottom line. But this is nonsense. I compete with my own list on a monthly and sometimes bimonthly basis, and no one single title is stealing sales from another. If anything, the more books I publish under my own label, the more sales I enjoy. This is exponential growth based on tangible assets--my books. And as far as my core group of fans are concerned, I can't possibly write fast enough.

If a publisher isn't moving your title, its not because your indie books are competing for shelf space (again, this is nonsense because in digital world there is unlimited shelf space), it's because of one thing and one thing only: they are not marketing and advertising your book effectively enough. Nor do most publishers need to spend cash flow on marketing since they rely on making small profits from lots of authors on a monthly basis. They aren't in the publishing business, so much as they are in the copyright real estate business.

As a hybrid author, you should be in the copyright real estate business too. You should be writing at pulp speed and creating a cityscape of titles that will earn significant positive returns over long periods of time.

Traditional:
Traditional publishers don’t want you writing. At base, a traditional house wants one book per year and only one book. There are several reasons for this. A publishing house is essentially a mega Goliath of editors, artists, marketing personnel, bean counters, you name it. They work high up inside a steel and glass tower (the Bertelsmann Building), and it costs them thousands just to turn the lights on every morning. Your book is just another expenditure in a sea of expenditures.
Lots of…let’s call them publishing professionals…will want a say in how your book gets to see the light of day. Everyone from the accountants to the foreign rights department will need some time with it, which means with all this bureaucratic swamp-like inefficiency running amok, it takes a year or sometimes more for the book to go through several rounds of edits and finally make the trip to the printing press.
Writers, when signing major contracts, need to be weary (and beware) of clauses that prohibit the author from publishing any other books that might compete with the contracted book for shelf space. This essentially hogties a writer and limits their income potential. Writers, like me, who are prolific and can write a novel in a single month, have trouble with this aspect of the traditional model because I can write way more than one book per year. Truth is if I don’t write more than one book per year, I’m doomed financially. That’s why most writers who publish exclusively with the Big 5 (or is it Big 4 now?), must maintain a day job while lots of hybrid and indie authors write for a living.
Which way would you rather live your life?

Indie:
Like I just said, I can write a 40,000-60,000 novel in about a month. Some novels, especially the longer (80,000 to 100,000 words), more literary psychological suspense standalones might take two months. A short story of up to 5,000 words might take a single day. A novella of anywhere between 10,000 and 20,000 words might take a week but no more than two. A 30,000 word short novel can take three weeks and another week to produce a final rewrite. What all this means, of course, is that I am able to put out a lot of good to great material, fast. There are indie and hybrid writers who are faster than me. Much faster. They write at what bestselling genre author Dean Wesley Smith has coined, Pulp Speed. That is, around 5,000 words per day, six days a week. At that speed, you can write a full 60,000 word novel in a week. And get this, you can do it easily.
I write full-time, but that doesn’t mean I sit at the laptop for eight hours per day. Far from it. I write utilizing the sprint method. In other words, I do maybe three to four half-hour to hour long sprints per day in which I produce anywhere from 500 to 1200 words. By the end of the day, I’ve written anywhere from 2,000 to 3,000+ words. You might be a little slower or a little faster. It’s all up to the individual.
But the point is, a professional writer should be writing every day. That’s how many of the pulp writers of the 1920s, 30s, 40s, and 50s became rich—by writing tons of words, day in and day out, and getting paid by the word by the pulp magazines. It wasn’t until the 1970s that the big establishment publishers began demanding that writers only put out one book per year. That ushered out the pulp era and began a new era whereby writers were no longer in control of their careers. But now, in this new digital age, writers are back in control and can decide for themselves how to publish. That’s why I choose to be a hybrid author, because I get the best of both worlds--the notoriety and acclaim that comes from traditional world, and the solid investment and passive income that comes from indie world.

The point to all this, is that I am able to put out way more than one book per year. Each book or

product I put out makes me money. Money I need to live and save and travel and eventually to pass

on to my children.

The truth revealed in one sitting... 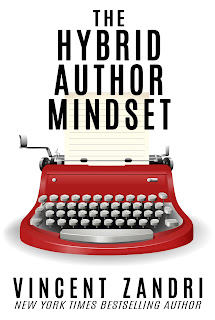